Disclosure: Delphi Ventures has invested in DYDX. This statement is intended to disclose any conflict of interest and should not be misconstrued as a recommendation to purchase any token. This content is for informational purposes only and you should not make decisions based solely on it. This is not investment advice.

The launch of the DYDX token has caused a rush of activity to the exchange, with open interest and volume rising sharply week-over-week.

Most users don’t seem to be sticking to simple BTC and ETH positions, as evidenced by the volume surge on DeFi and L1 perps. This isn’t too surprising given the current state of the market. L1 perp volume is dominated by ADA, but DeFi token perp volume is more even across pairs.

dYdX earned $1.8 and $1.5 million this week and last week respectively. The exchange’s average weekly revenue pre-token announcement was around $165K, meaning revenue has since risen by ~10x.

The exchange offers a smooth experience and has seen an uptick in liquidity over the past few weeks. However, a large percentage of fresh inflows are likely mercenary capital. As such, it remains to be seen if dYdX will be able to be retain users and continue growing or whether it will experience contraction as the initial token launch hype wears off.

The Effect of Farming Incentives

dYdX’s total volume increased from about $10 mn a day to over $250 mn a day in the span of a month. Open interest grew alongside volume, rising at a similar pace. This growth can be attributed to the recent DYDX token launch and traders attempting to farm DYDX rewards. 7.5% of the supply was airdropped to past users. But new token incentives for traders – comprising 25% of supply — are tempered and will be distributed over 5 years. If the DYDX token performs well on launch, it seems reasonable to expect liquidity to remain on the exchange to farm the token. 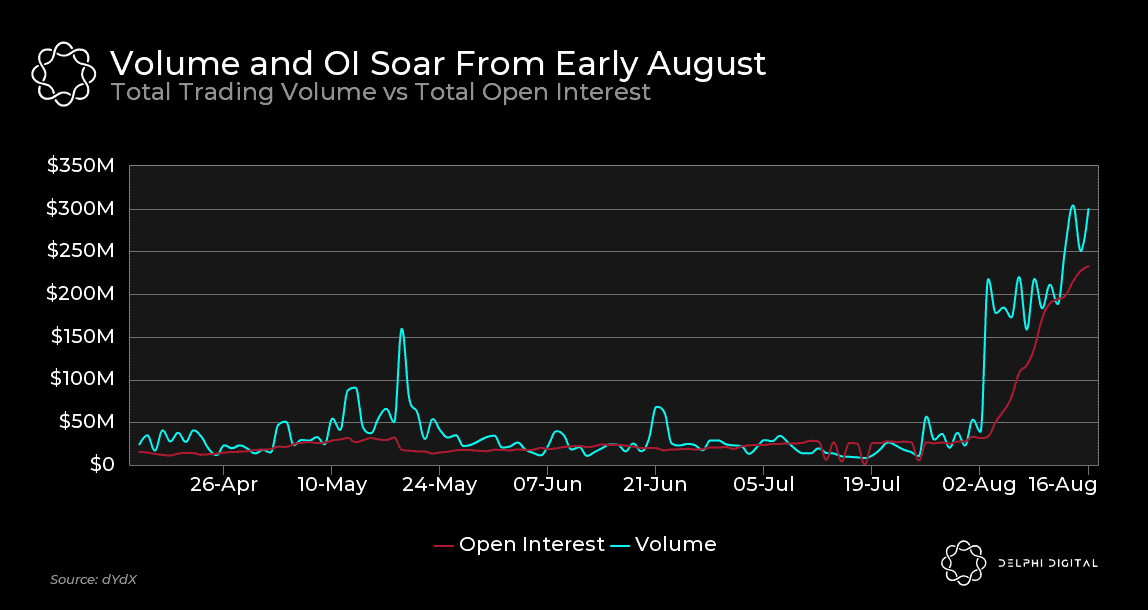 Volume and open interest tell us how much the exchange is being used. But user and trade count data tells us how many addresses interacted with the exchange, and to what degree they are active. dYdX saw trades per day rise from under 5,000 to over 40,000. That’s an 8x increase in the number of trades placed over a one week period. At the same time, weekly active users rose from 1,100 to 9,000 – another ~8x increase. While there’s definitely been an increase in unique users, there’s no perfect way to tell how many new individual users there are in total, since a single person can control several addresses. Importantly, “Active Users” in this context refers to unique addresses rather than unique users. 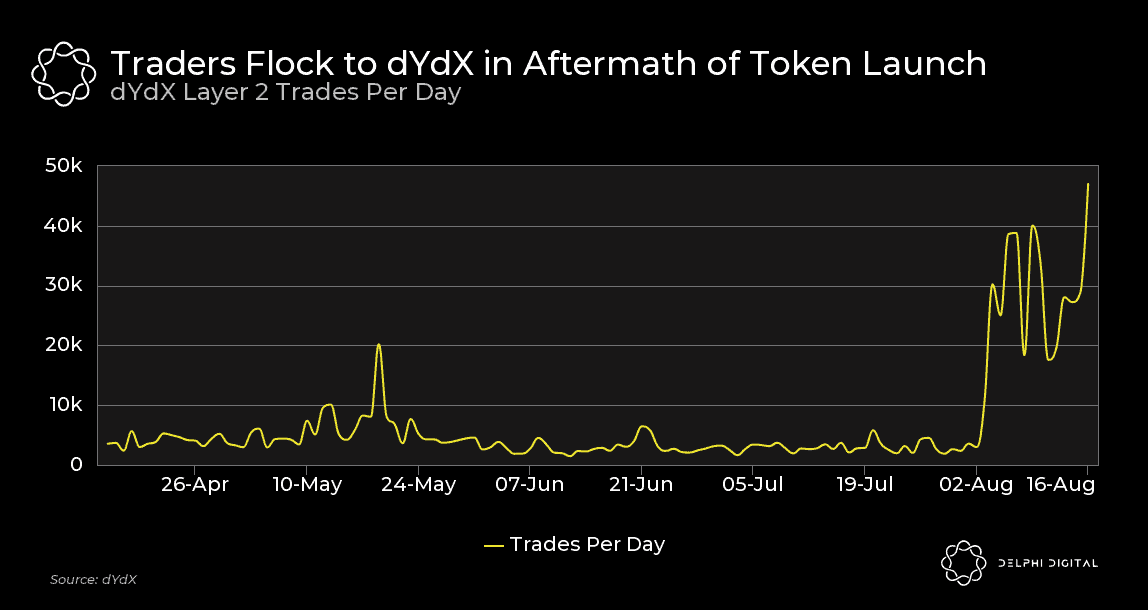 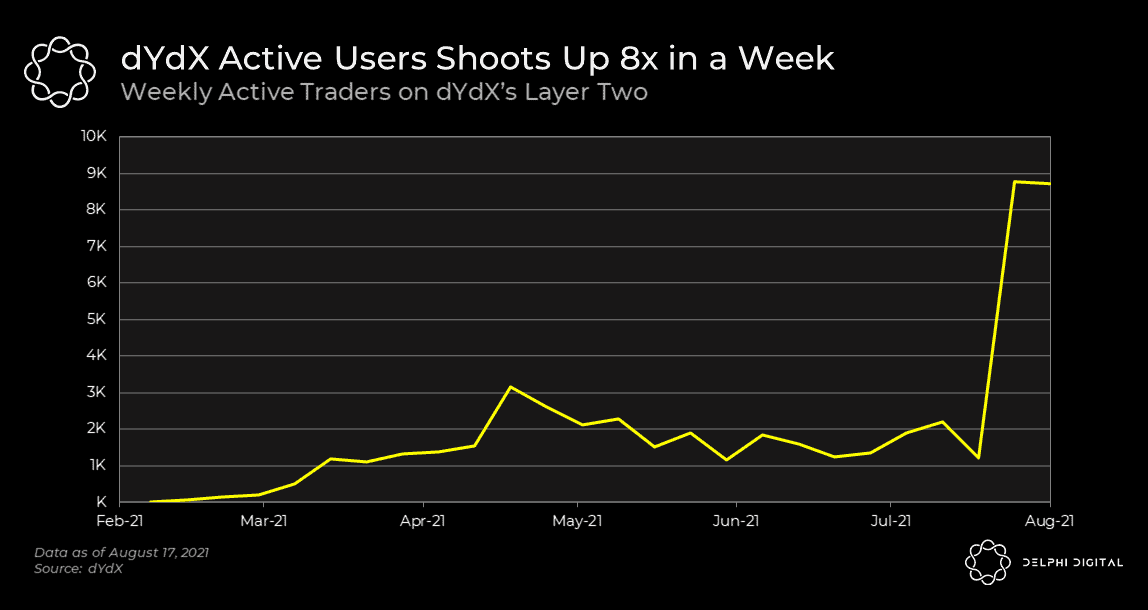 Considering the main incentive here is to farm DYDX rewards, it seemed like the easiest thing for traders to do was to just get long the most reliable crypto assets – BTC and ETH. Or to spin up multiple accounts and run a delta neutral book (long on one account, short on another account). But that’s not exactly what happened. ETH and BTC volume rose significantly and still account for most of the exchange’s volume. However, there was a meaningful amount of activity (via volume) driven to L1 and DeFi perps. 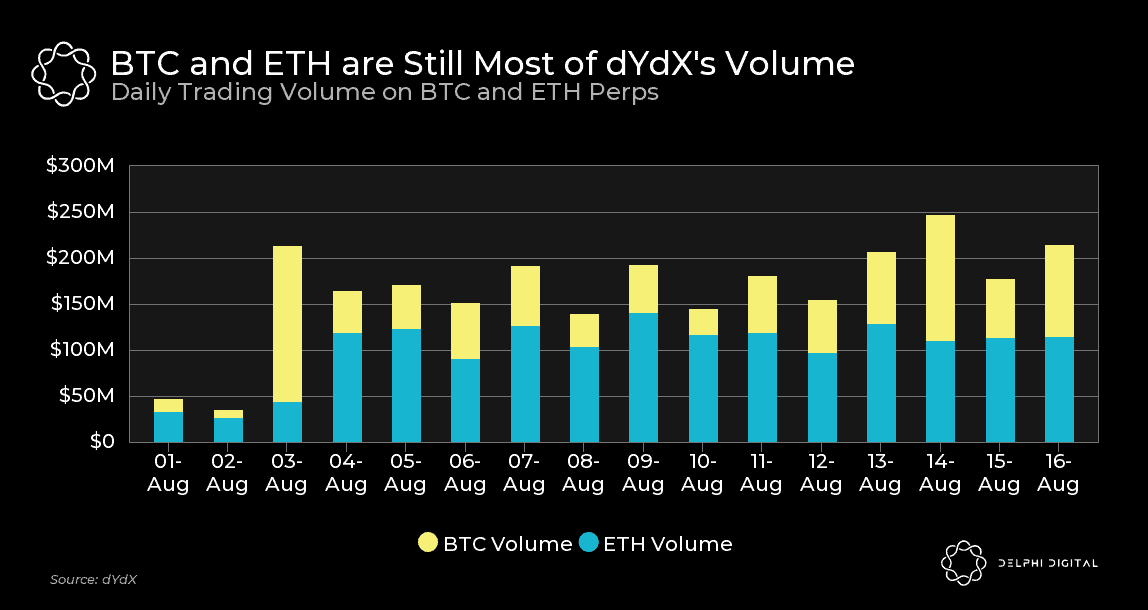 ADA led the way for L1s with over $10 mn of daily volume over the last 4 days. Interestingly, DeFi token volume is fairly evenly spread out across coins. Most dYdX traders are DeFi natives, so it makes sense that there’s less momentum-chasing when compared to L1 perps. With some assets making fresh all-time highs this week, sentiment is positive again and people are looking to increase their exposure. It seems like traders took this opportunity to earn DYDX while increasing their exposure to crypto. 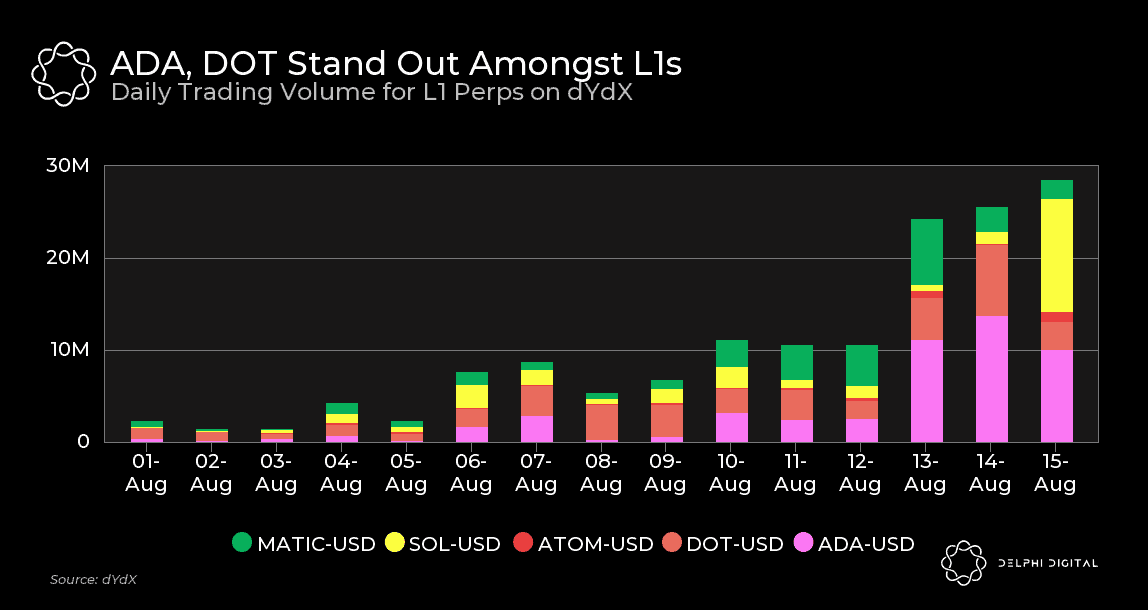 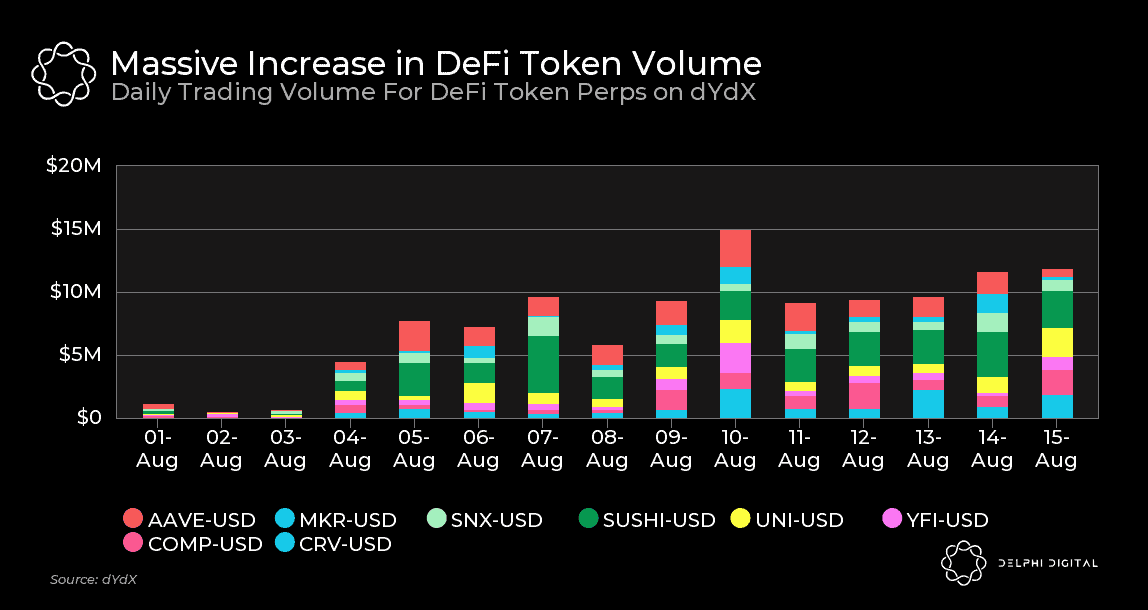 We expected to see virtually all fresh inflows get directed at BTC and ETH perps. As mentioned earlier, this was not the case based on the data. And this is corroborated by funding rates, which have remained relatively flat. There are some spikes on the ETH perp, which is not surprising given most prospective dYdX users would naturally be bullish on ETH. But it is quite surprising to see funding spikes to the downside a few days after the token launched, as it implies people used dYdX to enter shorts and potentially hedge. Notably, there was a fairly sharp spike in ETH funding a few days later, so it’s possible that these deviations are just a result of poor liquidity on dYdX’s ETH perp orderbook. Either that or demand for ETH perp contracts exceeds market maker capacity at the moment. For the most part, funding has stayed close to par with the rest of the market, meaning dYdX has been able to absorb a lot of new activity without it impacting the trading experience. 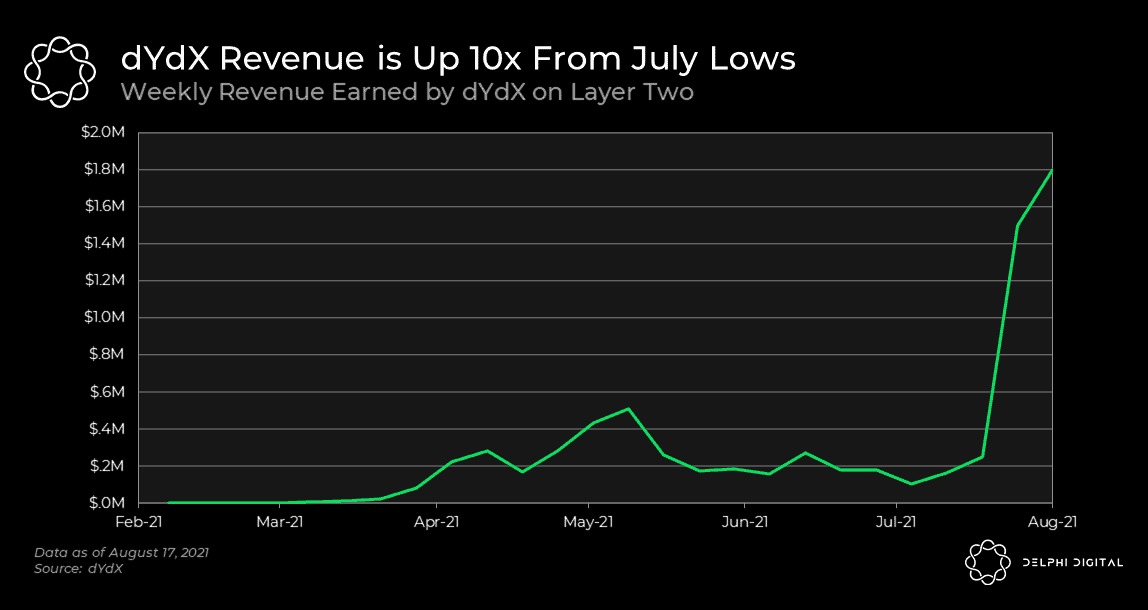 Finally, revenue is up massively thanks to the spikes in usage. It’s going to be interesting to see how this plays out now that there’s a governance token live, and if a percentage of revenues will flow down to DYDX token holders. Overall, dYdX’s growth metrics are up 8-10x on average over the last week. But it’s important to remain somewhat cautious when growth is entirely driven by token incentives. The trading experience on dYdX is as good as any exchange or DEX, but the feature-set (high leverage, diverse pairs, high liquidity) still lacks in certain areas. As the exchange iterates and adds new features, we expect the exchange to grow remarkably over the long-term. But it will be interesting to see how dYdX’s growth is affected by the token’s genesis event in 2 weeks. 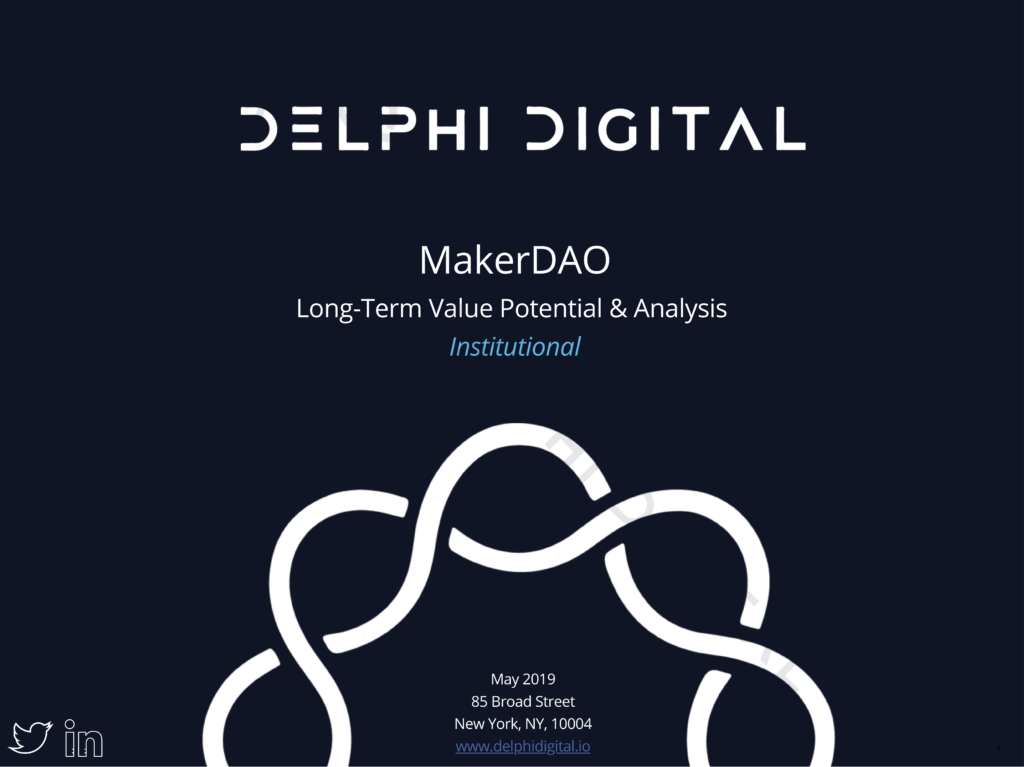 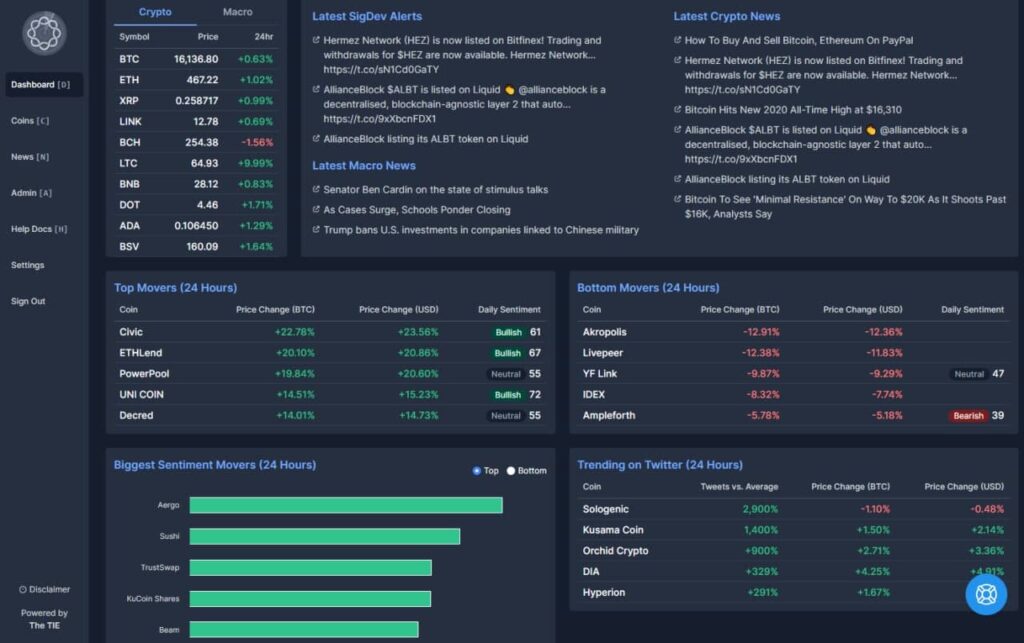