An Update on DeFi Perps

By Ashwath Balakrishnan, and Jayden Andrew

Disclosure: Delphi Ventures is an investor in dYdX, MCDEX, and Vega. Delphi Labs also works with Perpetual Protocol. This statement is intended to disclose any conflict of interest and should not be misconstrued as a recommendation to purchase any token. This content is for informational purposes only and you should not make decisions based solely on it. This is not investment advice.

Perpetual Protocol has had consistently higher daily trading volumes compared to dYdX. Both protocols hit their peak daily volume on May 19th — with dYdX settling over $150 million in trades while Perpetual Protocol facilitated over $500 million.

It’s worth noting, Perpetual Protocol runs an in-house arbitrage bot which contributes a meaningful amount of volume (currently about ~20% of daily volume). The bot has also paid $4.5 million in fees, which amounts to approximately 22% of the protocol’s total fees earned since launching on xDAI.

dYdX funding rates for BTC-USD and ETH-USD trading pairs remain fairly normal over time, flip flopping between positive and negative territory. However, due to situations where presumably nobody wants to provide liquidity to one side, funding spikes to extreme levels, as observed in early July. Perpetual Protocol, on the other hand, has consistently negative rates, which means the balancing incentive hasn’t really worked as intended. If you want to go long, Perpetual Protocol might be the place to be at the moment.

Perpetual Protocol comes out on top in terms of fees generated, compared to dYdX. At its peak, Perpetual Protocol pocketed over $2.5 million in fees per week while dYdX grazed $500,000 over the same time period.

Perpetual futures continue to be crypto’s most popular financial instrument. Despite the prevailing market conditions, Binance facilitated $3 trillion of perp volume in May and $2 trillion in June. Perp products on Binance, and other exchanges, have routinely settled more trading volume than spot products over the last year. It’s clearly evident that perpetual futures are incredibly important for crypto — and now they’re making their way into DeFi. 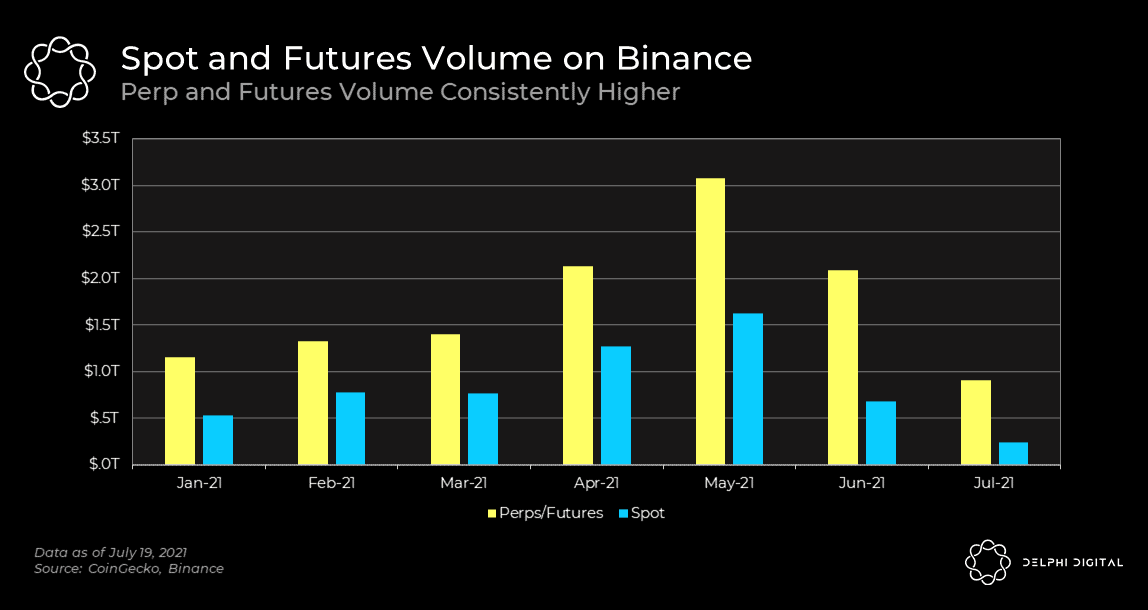 Earlier this year, we published a deep dive into DeFi perpetuals. That report highlighted projects building out perpetual futures and discussed how their designs differed from each other. Last week, we published a post highlighting the success of Perpetual Protocol and its upcoming v2 plans. In this piece, we’ll compare dYdX and Perpetual Protocol’s recent activity in greater detail, since they’re basically the only DeFi perp products currently live. Towards the end, we’ll also give an update on other prominent perp projects gearing up to launch their mainnet in the near future.

Although it lived on Ethereum’s base layer for much of its life, dYdX was migrated to a StarkEx zk-Rollup in April of this year, unlocking cheaper trading and higher throughput.

Perpetual Protocol, as the name suggests, is a perpetual futures product that runs on the xDAI sidechain. The current version of the protocol uses a virtual AMM (vAMM), which enabled them to kickstart new, competitive markets without relying on liquidity providers. Perpetual Protocol’s recently announced v2 will deploy on Arbitrum and leverage Uniswap v3 as its pricing engine.

What the Numbers Say About DeFi Perps

The most obvious data point to gauge traction for an exchange is its trading volume. From the chart below, we can see that Perpetual Protocol has had consistently higher daily trading volumes compared to dYdX. Both protocols hit their peak daily volume on May 19th — with dYdX settling over $150 million in trades while Perpetual Protocol facilitated over $500 million. 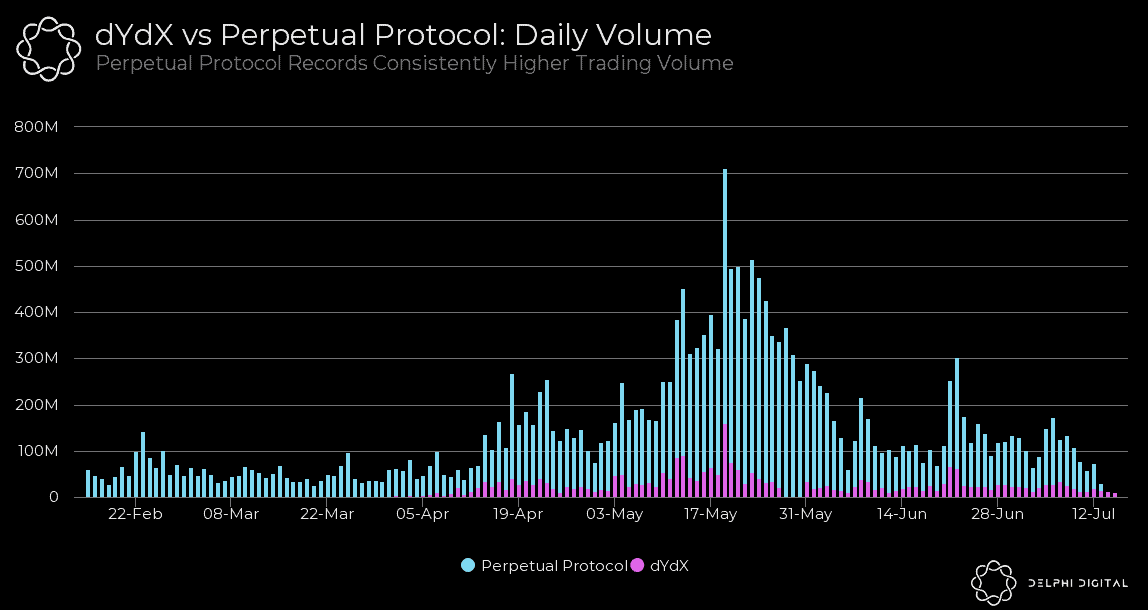 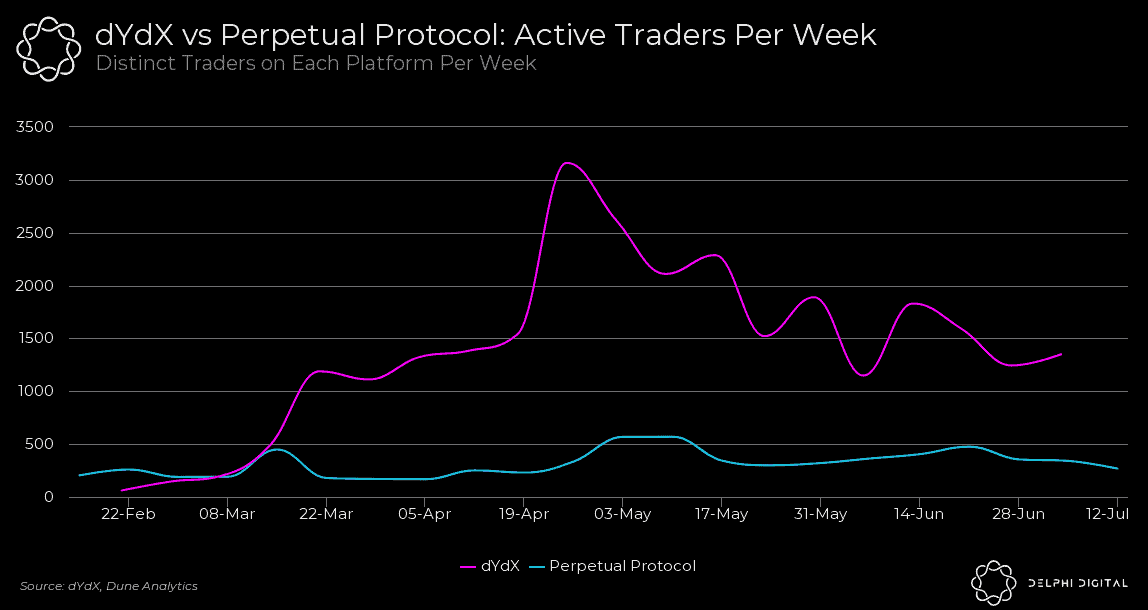 So while Perpetual Protocol facilitates more volume per day, dYdX has a larger user base. It’s worth noting, Perpetual Protocol runs an in-house arbitrage bot which contributes a meaningful amount of volume (between 10% and 50% of daily volume since launch). While relying on an internal bot to balance price is obviously not an ideal situation, it isn’t necessarily bad either. All the bot does is open positions on Perpetual’s vAMM to push the mark price closer to the index price, thus offering traders on the platform accurate pricing. 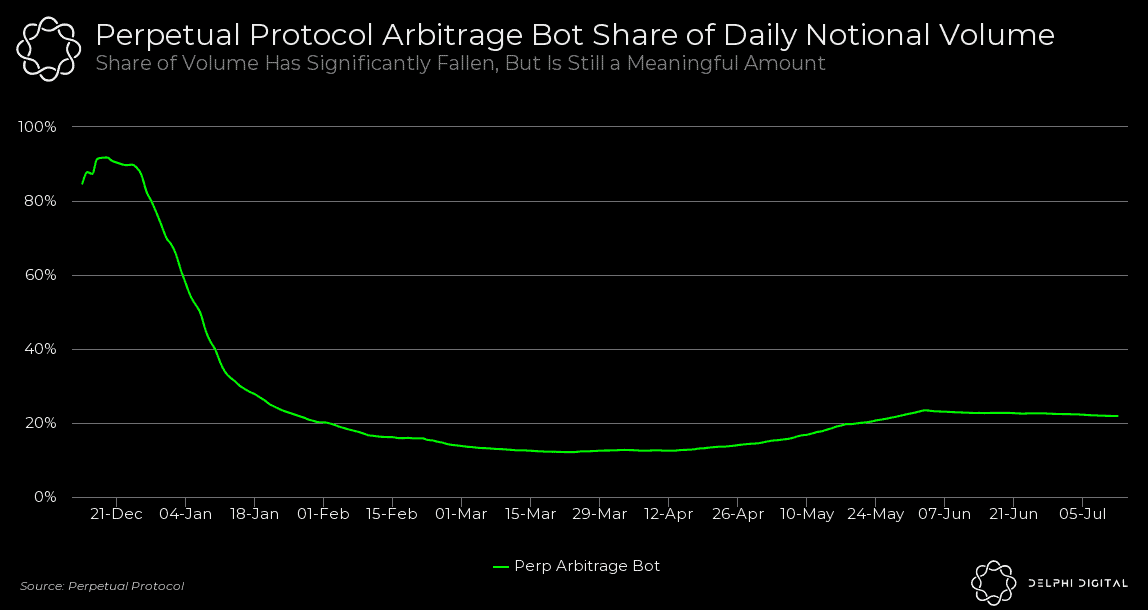 Funding rates are one of the most important metrics to observe when tracking pricing efficiency. The more a perp’s price diverges from its index price, the more drastic funding will be. Funding near 0% implies balanced positioning, while meaningful positive or negative funding implies one side of the market (either longs or shorts) is skewed relative to the other.

Looking at funding rates on BTC, we see dYdX rates are fairly normal, flip flopping between positive and negative territory. However, there have been drastic funding spikes, as observed in early July. Perpetual Protocol, on the other hand, has consistently had negative rates, which indicates the platform has been paying traders to open long positions on their platform. This is a result of their pricing mechanism, which under certain conditions requires an imbalance between longs and shorts to keep the mark price close to the index price. 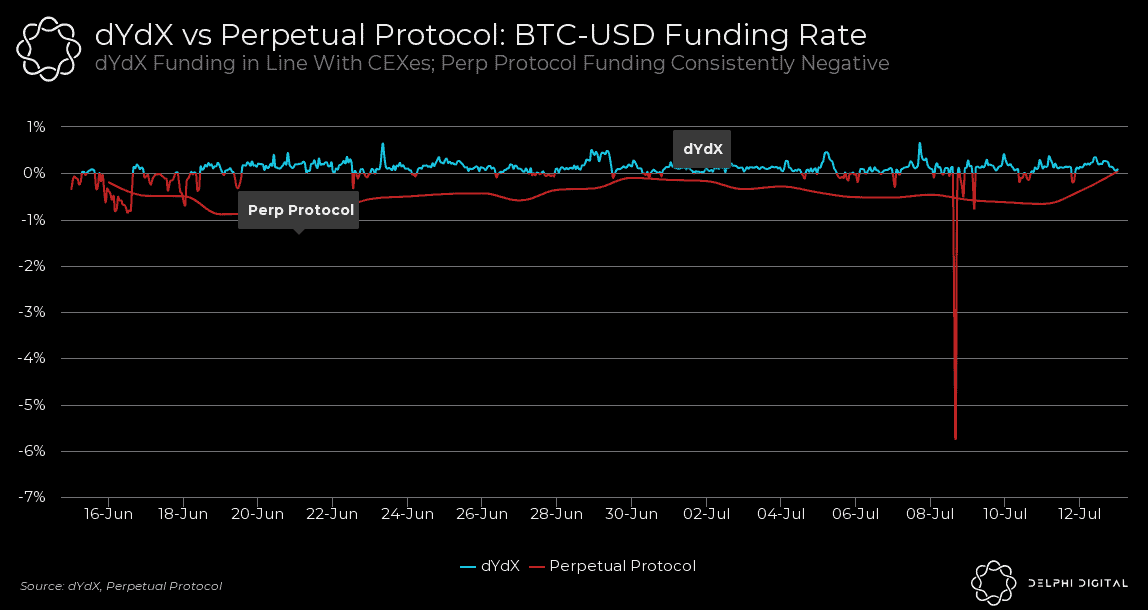 ETH funding rates reinforce the picture painted by BTC funding rates. dYdX shifts from positive to negative funding alongside the broader market, but has instances of extreme spikes during times of low liquidity. Perpetual Protocol, once again, has consistently negative rates driven by an imbalance in the number of longs to shorts. 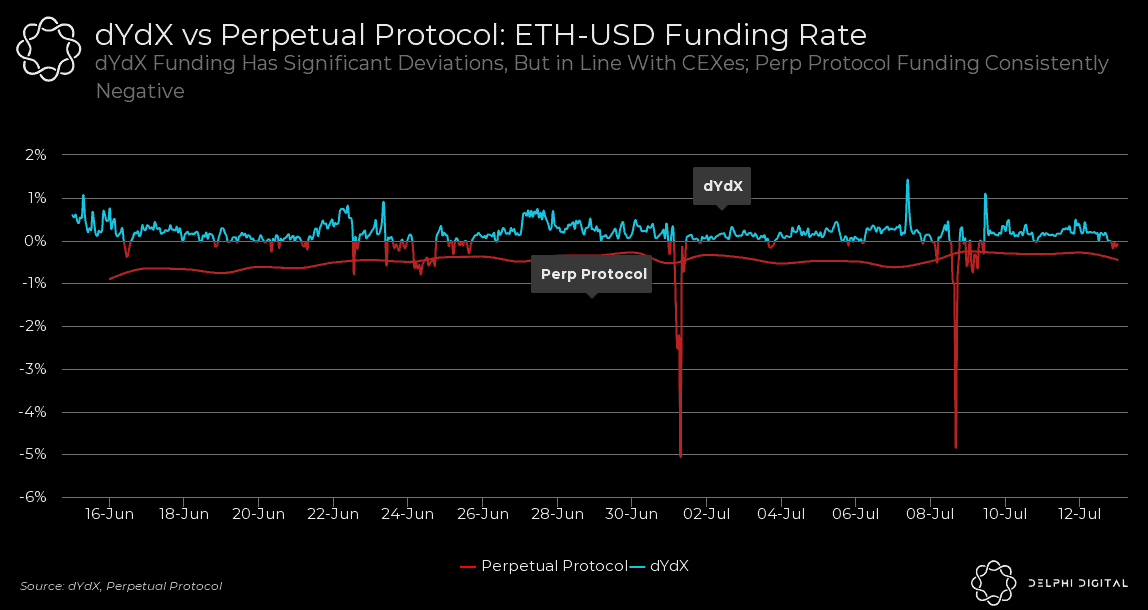 In terms of revenue, Perpetual Protocol once again stands tall with higher numbers than dYdX. At its peak, Perpetual Protocol pocketed over $2.5 million in fees while dYdX grazed $500,000. But this data ignores a lot of nuance in how the two protocols operate. 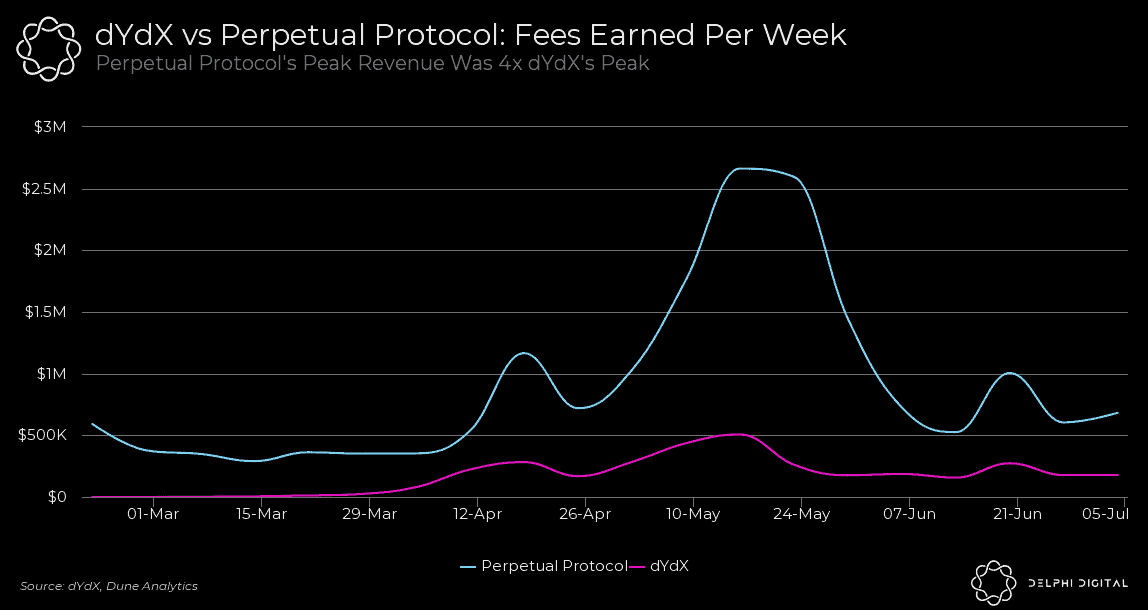 dYdX is an orderbook, meaning there are makers (those who provide liquidity on the orderbook) and takers (those who pull liquidity off an orderbook to match their orders). There are different fee tiers (ranging from 0.05% to 0.2%) for makers and takers, and additional tiers linked to a user’s monthly volume. On the other hand, Perpetual Markets is an AMM, so every trader is a taker by default. A flat fee 0.1% is levied on anyone who executes a trade.

With higher volume, it’s only normal that Perpetual Protocol also has higher revenue. Additionally, according to this Dune Dashboard, Perpetual Protocol’s arbitrage bot has paid $4.5 million in fees, which amounts to approximately 22% of the protocol’s total fees earned since launching on xDAI.

The Future of DeFi Perps

dYdX and Perpetual Protocol are both great venues for trading and should continue to improve over time. But there are some new competitors popping up that could pose a serious challenge to both exchanges: 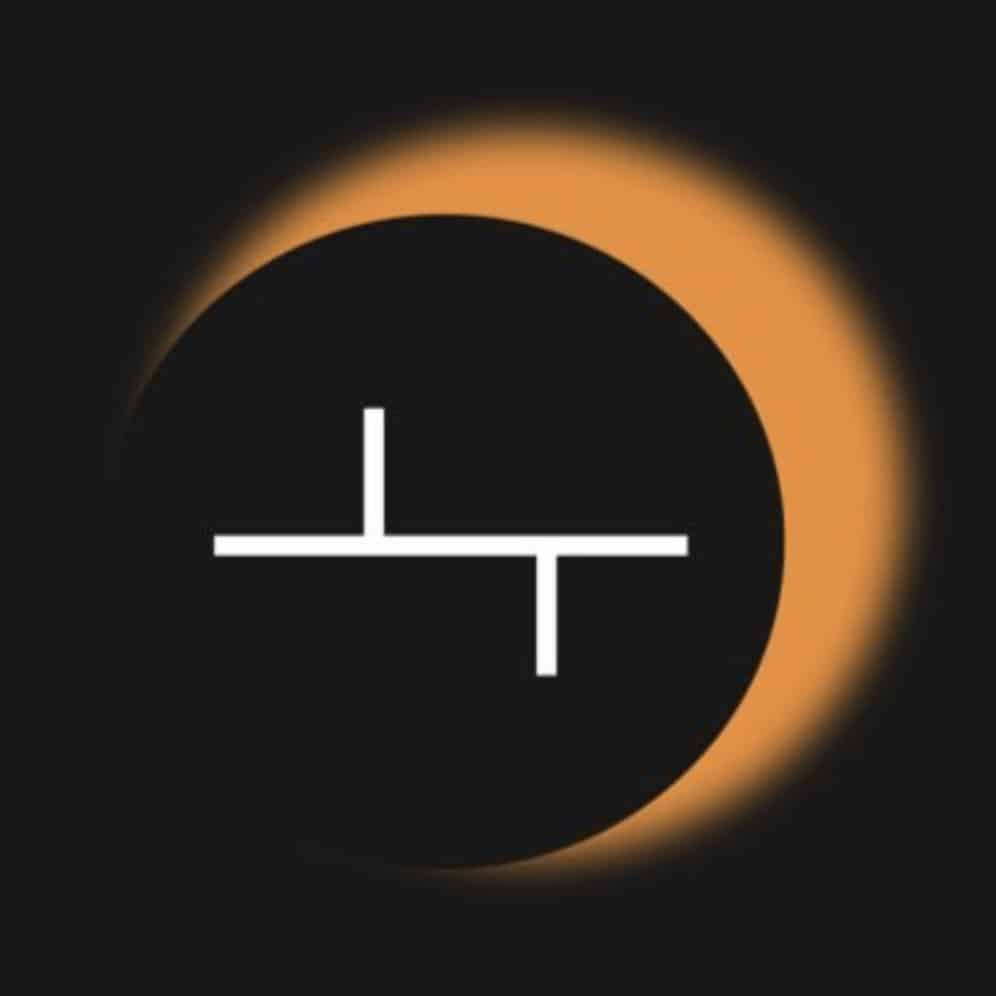 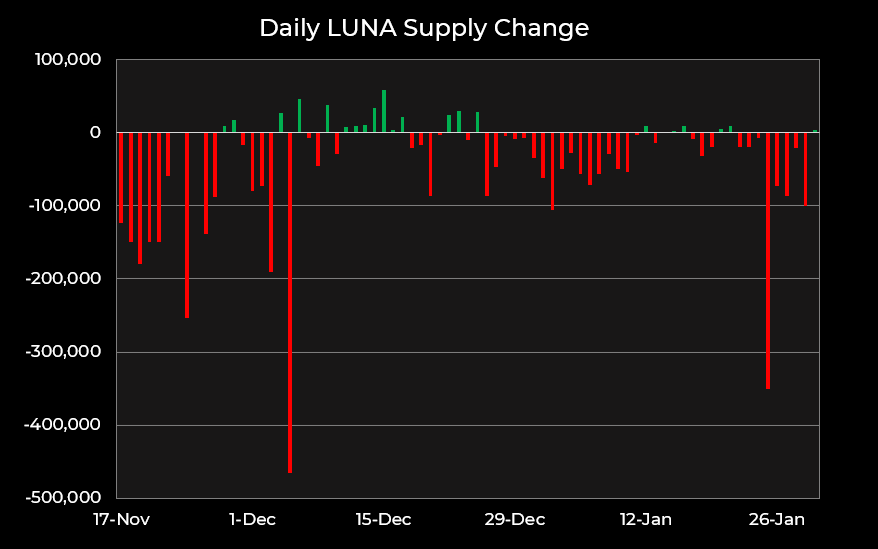 Mirror vs Synthetix? How About Terra 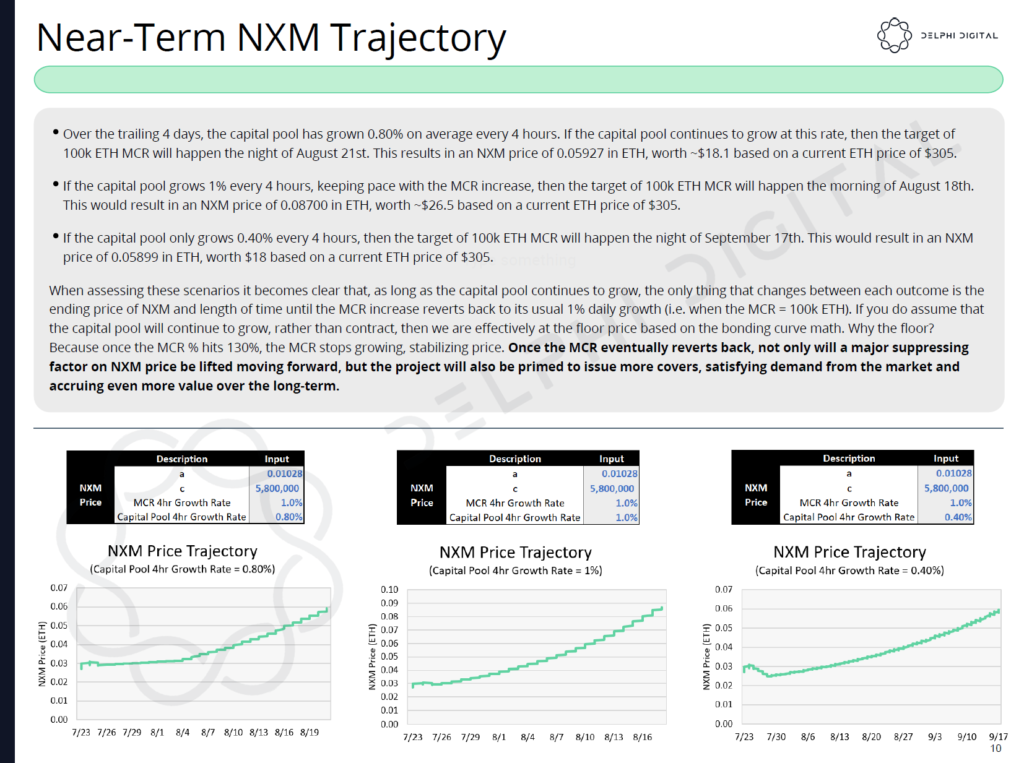