Anchoring The Market To A New Reference Rate Disclosure: Delphi Ventures and members of our team have invested in Anchor and LUNA. Delphi Labs is also incubating projects in the Terra ecosystem. This statement is intended to disclose any conflict of interest and should not be misconstrued as a recommendation to purchase any token or participate in any farms. This content is for informational purposes only and you should not make decisions based solely on it. This is not investment advice.

In this note, we’ll cover the upcoming launch of Anchor and what it means for the Terra ecosystem. While Anchor is an interesting protocol in and of itself, we argue its second-order effects on the Terra ecosystem more broadly, and on LUNA specifically, are even more interesting and currently misunderstood by the market. We will begin by providing an overview on Anchor and its mechanics. With this context in place, we will then highlight its potential impact on LUNA. In the short-term, we believe Anchor will drive a supply-side liquidity crisis for LUNA by both increasing the amount of staked LUNA via ANC incentives and demand for UST via its 20% APR. In the long-term, we argue Anchor helps break some of the downward reflexivity we can expect to see in a bear cycle for UST as an algorithmic stablecoin by providing crypto’s “risk-free rate”.

Anchor is a new savings protocol built on top of Terra. The main objective of Anchor is to offer depositors stable interest rates and, ultimately, to become the “reference interest rate across the universe of blockchains”. The way in which Anchor aims to achieve this is quite interesting and puts the protocol in a unique position within the massive savings market.

At its core, Anchor employs a money markets architecture to connect savers and borrowers. However, in contrast to more traditional money markets currently live in the crypto space (i.e. Aave and Compound), Anchor’s architecture is tailored specifically to offer savers more stable interest rates. The way in which Anchor achieves this involves several different components that all tie together into an elegant design. Let’s explore each of these pieces.

Savers: From the savers perspective, the Anchor experience is straightforward. The platform is going to offer a fixed interest rate, called the Anchor rate, to depositors of Terra stablecoins. Initially set at 20%, the Anchor rate will be adjustable by governance going forward. For savers, the appeal of such a product is evident; as opposed to the current volatile rates which are prevalent in crypto (see figure below), Anchor is going to be a source of predictable passive yield. 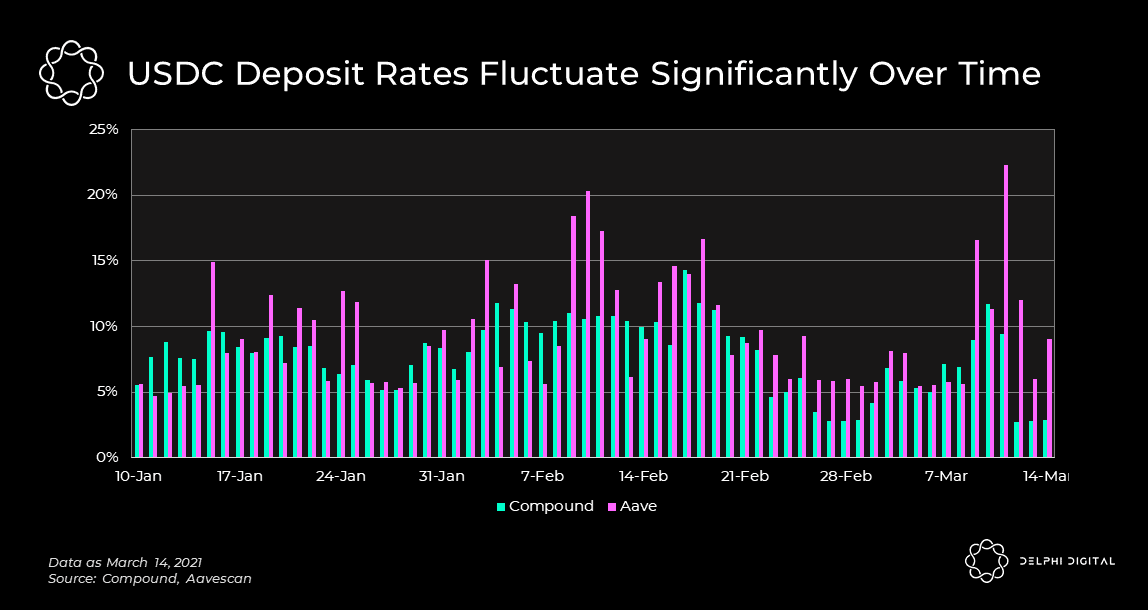 Borrowers: One of the most important design decisions regarding the Anchor money markets is that the protocol will only allow for staking derivatives of the major PoS blockchains to be posted as collateral. The reason for this is that, as naturally yield bearing assets, they represent a robust base to guarantee the Anchor rate for savers. Within the Anchor system, borrowers that deposit staking derivatives (called bAssets in Anchor) as collateral, sacrifice the staking yield from the deposited assets in exchange for borrowing capacity (with a subsidized interest rate that could possibly be 0) and Anchor token (ANC) incentives. The staking yield from those assets, in turn, is used to pay for the interest accrued by savers at the Anchor rate.

Initially, Anchor will only accept bLUNA (which represents staked LUNA) as collateral, but will eventually expand to accept staking derivatives from the most important PoS blockchains, including Ethereum, Polkadot, Cosmos and Solana.

Stabilization mechanism: For the system described above to work, though, there needs to be a certain balance between savers and borrowers. Otherwise, two undesired scenarios could emerge. The first and most important one is the case where the yield generated from bAssets in the platform isn’t enough to cover the Anchor rate for savers. The other case happens when there’s an excess of borrowers on the platform, which implies that they’re being overcharged for the service they’re receiving. To mitigate the likelihood of these scenarios, Anchor introduces a stabilization mechanism that works as follows:

The following image may help better understand how the mechanism works. 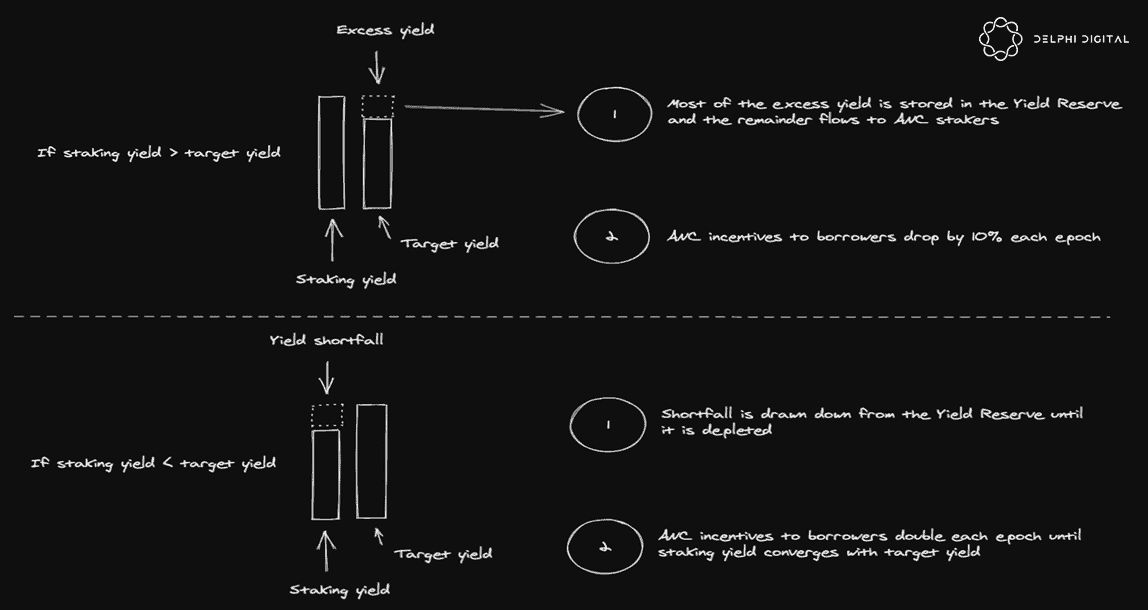 The ANC token will serve two purposes within the Anchor ecosystem:

The total supply of ANC will be 1B tokens, distributed as follows: 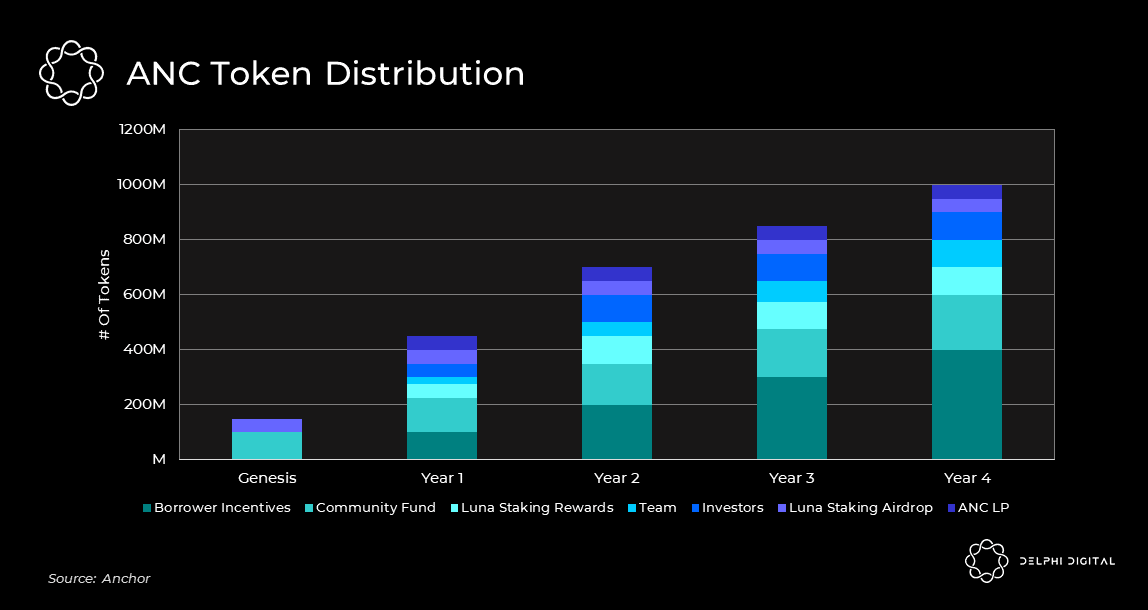 Several important aspects of the distribution are worth highlighting:

One of the most interesting aspects of the Terra ecosystem is how new products built on top of the platform are value accretive to LUNA, something we’ve covered in previous notes (here and here). In a similar way to what happened with Mirror, we expect Anchor to have a significant impact on LUNA via two main drivers: 1) increased demand for LUNA; and 2) increased demand for UST (which in turn leads to a decreasing LUNA supply). Let’s explore why.

LUNA staking rewards: LUNA stakers will receive 10% of the total ANC supply over the coming two years. All else equal, this makes the token more valuable as staking yield will be higher. Furthermore, this creates a strong narrative where projects launching on top of Terra are expected to benefit LUNA stakers over the long term through staking rewards. As such, the LUNA token could become a de-facto pass-thru token for ownership in every product built on top of Terra.

bLUNA demand: Initially, the only asset accepted as collateral on Anchor (and accruing ANC rewards) will be bLUNA. However, bLUNA will only be able to be created with LUNA, not with staked LUNA. This could potentially translate into a supply side liquidity crisis for LUNA, as speculators rush to acquire the token in the market and deposit it as collateral in Anchor. This liquidity crisis could be particularly pronounced as, of the total circulating supply, 69% is staked – which takes 3 weeks to unstake. This leaves around ~138M LUNA available in the market to be used to mint bLUNA and use as collateral within Anchor. However, we estimate that only a fraction (20-30%) of these ~138M tokens will be available on exchanges to be bought for use on Anchor. Thus, given the limited LUNA supply and expected increasing demand, a supply side liquidity crisis could ensue in the coming weeks.

UST demand: There are currently more than $6.5B deposited in Aave and Compound in USDC, DAI and USDT earning somewhere between ~4-14% APY. Anchor will offer a UST savings account at a highly competitive 20% APR. It’s hard to predict what market share Anchor will garner, particularly at this stage in the project, but the value proposition is clear. Considering UST has a ~$1B market capitalization, even a low market share within the current crypto savings market could have a significant impact on UST seigniorage. As was explored in this note, UST seigniorage is highly value accretive to LUNA, as all seigniorage is used to buy LUNA off the market and burn it. Furthermore, this picture doesn’t even consider the real TAM for a high interest savings account. Even though Anchor will be bootstrapped through the current crypto audience, eventually it will be incorporated into Chai (Terra’s e-commerce platform) and potentially other fintech companies. As it starts tapping into a more mainstream audience, the impact on LUNA could be significantly larger than at the early stages of the project.

Leverage on LUNA: Anchor will be the first avenue for LUNA holders to leverage their LUNA position. This could have an impact both on LUNA and UST demand. On the LUNA side, it will be possible for users to deposit bLUNA, borrow UST and lever up on LUNA to repeat the process, thus increasing LUNA demand. On the UST side, some users may deposit bLUNA and borrow UST to use it within the Terra ecosystem; one potential use case would be to use that UST to farm on Mirror, for instance.

Aside from what’s already been mentioned, Anchor represents a key part of the Terra ecosystem for another, more nuanced, and arguably more important reason: it’s a fundamental tool for mitigating the potentially fatal, negative reflexive cycle that could ensue for the Terra ecosystem during a bear market. As we explored in our first note on Terra, LUNA’s main role within the Terra ecosystem is absorbing stablecoin volatility. As such, during a downturn, if stablecoin demand contracts too rapidly it would have a serious adverse effect on LUNA. This is where Anchor could play a vital role within the ecosystem. By offering a high fixed interest rate for depositors, Anchor has the potential to attract a significant amount of deposits during a downturn – potentially higher than during a bull market, as investors rush into stablecoin positions looking for protection. This additional UST demand, then, would mitigate the negative price impact on LUNA, as UST seigniorage would be used to buy LUNA off the market and burn it, as was explained before. Given its countercyclical nature, Anchor represents a key piece of infrastructure within the Terra ecosystem.

Anchor is an exciting new product that uses money markets infrastructure with some key innovations to produce the first crypto based fixed rate savings account. Even though initially it will be bootstrapped through the current DeFi crypto audience, we expect it to start tapping into a more mainstream audience in the medium term. The success of the platform could have a significant impact not just for ANC, but also for LUNA as was explored throughout this piece. We will be closely monitoring how the platform evolves during the coming months and how it impacts the overall Terra ecosystem. ** Based on purchase of annual subscription.