By Duncan Reucassel, and Jeremy Ong

DISCLOSURE: DELPHI VENTURES HOLDS YFI. MEMBERS OF OUR TEAM ALSO HOLD YFI & CRV. THESE STATEMENTS ARE INTENDED TO DISCLOSE ANY CONFLICT OF INTEREST AND SHOULD NOT BE MISCONSTRUED AS A RECOMMENDATION TO PURCHASE ANY TOKEN. THIS CONTENT IS FOR INFORMATIONAL PURPOSES ONLY, AND YOU SHOULD NOT MAKE DECISIONS BASED SOLELY ON IT. THIS IS NOT INVESTMENT ADVICE.

Convex’s TVL has grown to $6.6b in 3 months via a synergistic relationship with Curve, creating one of DeFi’s most powerful flywheels.

Convex controls ~30% of Curve governance and is currently farming ~73% of all CRV LP emissions.

Importantly, those who deposit their CRV into Convex are surrendering control of it forever. The liquid staking token they receive in return, cvxCRV, can be sold or staked but there’s no guarantee that it will be able to maintain its price peg to CRV, although there are incentives in place to support it.

Aggregators like Yearn, Badger and Harvest have deployed anywhere between 25-54% of their AUM into Convex to stay competitive on Curve-based strategies. Badger stands out as their implementation is very beneficial for the Convex flywheel.

In addition to the yield from Curve, CVX supply emissions are heavily subsidizing Convex’s top pools. Interestingly, the CVX emission schedule is not a function of time but is rather determined by the amount of CRV rewards farmed by Convex. If Convex continues to capture ~73% of all CRV LP emissions then, according to our projections, ~92% of the total CVX supply could be emitted by this time next year.

Convex has been able to capture meaningful value thus far from Curve, generating cumulative protocol revenue of over $11.3m in only 3 months. 5% of all yield earned is paid to CVX stakers which, when current figures are annualized, is roughly $18.4m a year. This equates to a fully diluted P/E of 38.5.

Convex Finance is a Curve-focused yield optimization platform that boosts yields for liquidity providers without requiring them to lock up excess capital in veCRV. In only 3 months time, Convex’s TVL has grown to $6.6 billion via a synergistic relationship with Curve. In this post, we’ll dive in and explore what’s quickly become one of DeFi’s most powerful flywheels. 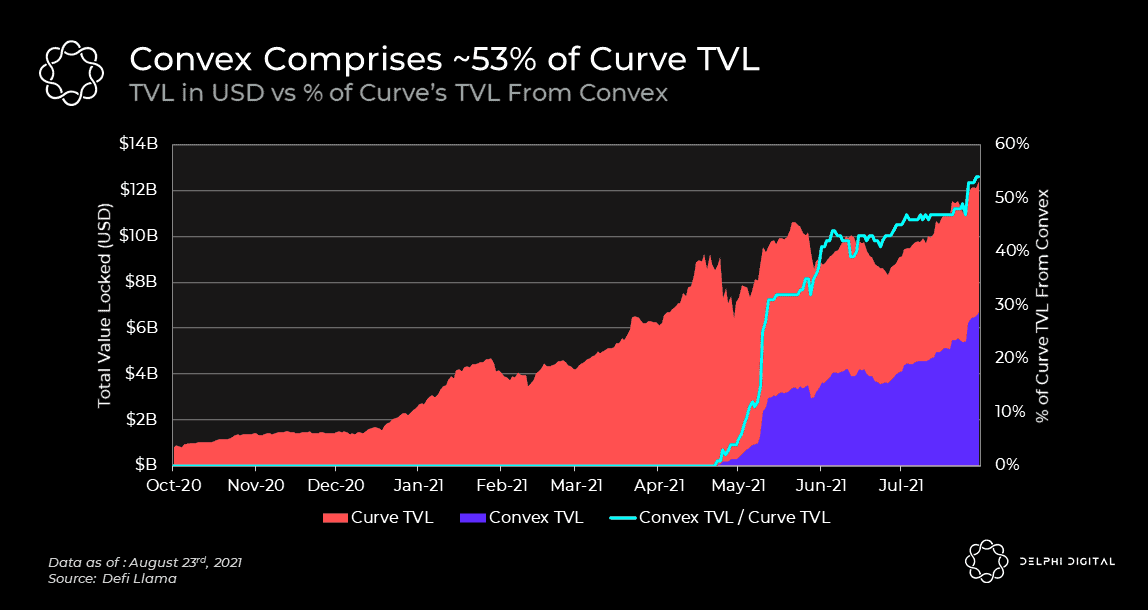 To better understand the Convex/Curve relationship, let’s start by doing a quick refresher on how Curve’s governance and economics work. Users lock up CRV in Curve governance and receive vote-escrowed CRV (veCRV) in return. This allows them to earn boosted CRV rewards on the pools they are providing liquidity to (max boost up to 2.5x) and participate in governance. Importantly, voting allows veCRV stakers to set gauge weights on a weekly basis, which decide how CRV issuance will be allocated across the various liquidity pools as rewards. For example, if you were providing liquidity to Curve’s 3pool you would logically vote to direct more CRV issuance towards it because that would increase your yield. At a high level, this is how Curve incentivizes liquidity providers to frequently participate in governance, ideally becoming active stakeholders for the long-term. 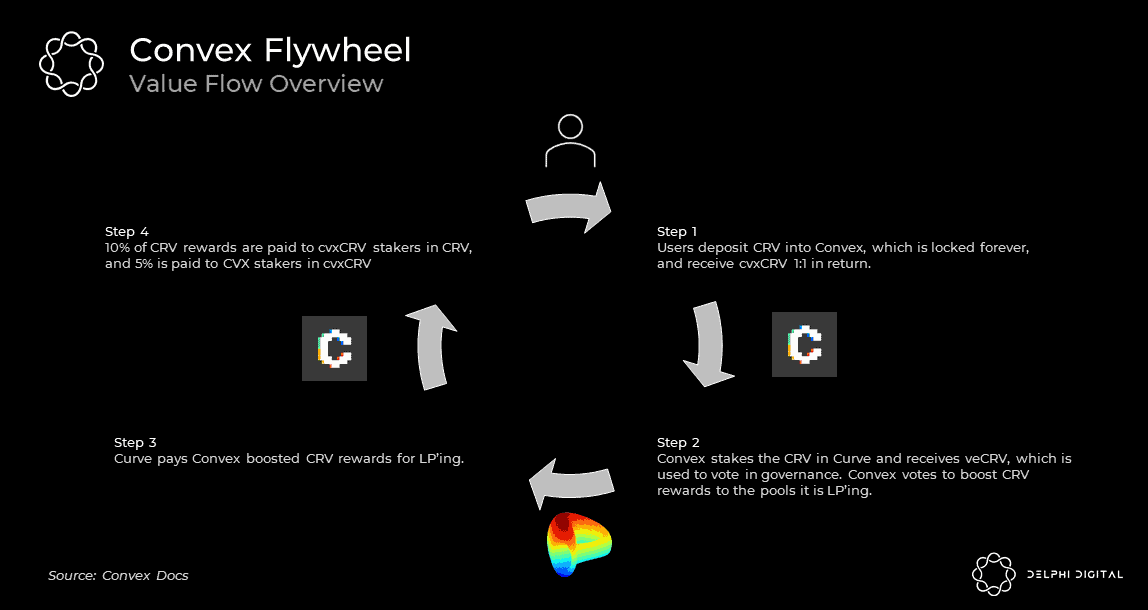 In the diagram above, we’ve provided a high level overview of the Convex/Curve flywheel in action. The first thing that might stand out to you is referenced in Step 1. Specifically, that all CRV deposited into Convex is locked up forever. Phrased another way, this means that Convex becomes the owner of your CRV after the deposit. This begs the question – why would an individual hand over their assets permanently like this?

Importantly, depositors are given a liquid staking token, cvxCRV, in return. The amount of cvxCRV is minted at a 1:1 ratio with the amount of CRV deposited. Having cvxCRV maintain a close price peg to CRV on the open market is the lynchpin that holds everything together. Remember, cvxCRV is liquid meaning there will be sell pressure. Furthermore, because there’s no way to redeem it for the underlying CRV, since that is locked forever, there’s no arbitrage opportunity that would naturally bring the two asset prices back to parity if they diverged. With this in mind, it’s clear that there needs to be an incentivized reason for people to hold / buy cvxCRV, and there is. cvxCRV can be staked in Convex, earning the staker a mix of Curve trading fees, in addition to CRV & CVX rewards. An alternative way to generate yield on cvxCRV is to provide liquidity to the cvxCRV/CRV pool on SushiSwap, earning the LP CVX rewards. We’ll discuss the sustainability of this dynamic and break down current yields into their different components later on in the post.

Let’s pivot back to how Convex leverages Curve’s design to boost the yield for its users. Convex takes the deposited CRV and stakes it in Curve governance, for the max amount of time, to benefit from the yield multiplier on the liquidity its provided, while also giving it sizable influence to vote in higher gauge weights for the pools it is LP’ing, further boosting yield. Additionally, 5% of the yield that is earned gets automatically locked up, minting more cvxCRV, which allows Convex to continue compounding its veCRV holdings over time. If this idea sounds familiar, it should. Yearn Finance has been running similar strategies for almost a year now, albeit without the added token incentives that Convex has been able to offer with CVX. If you’re interested in learning more about how Yearn/Curve work together, please refer to our report on this topic from last October. 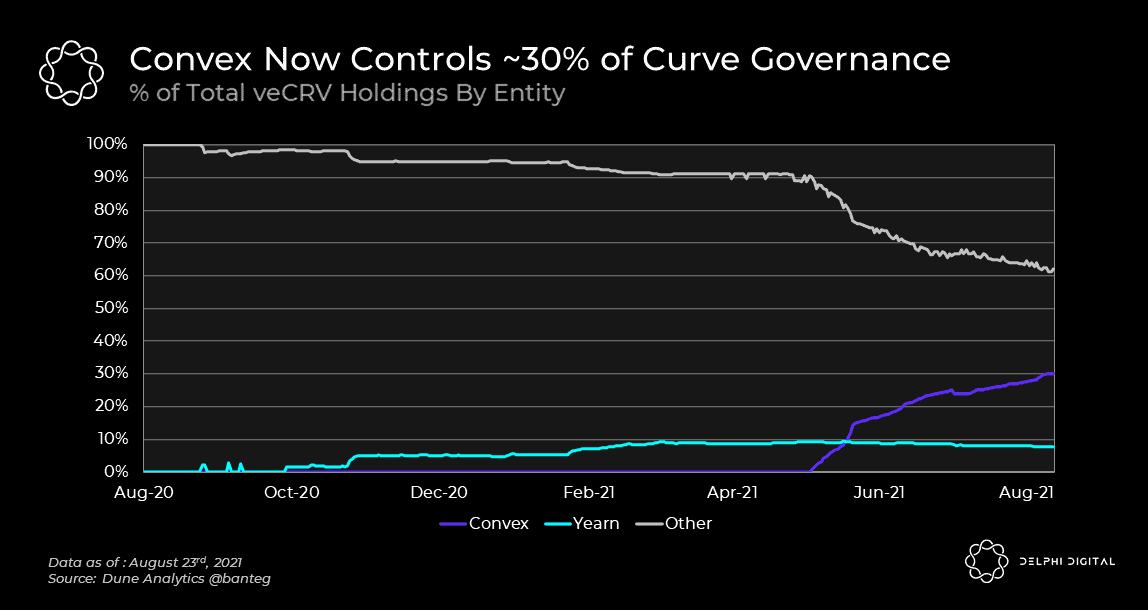 As you can see in the chart above, Convex’s veCRV holdings have continued to expand over the past 3 months. Since we last covered this topic on June 28th, Convex has been able to grow from ~20% to ~30% of the total veCRV supply. Impressively, Convex is now capturing ~73% of CRV emissions, cementing them as the leading Curve-based aggregator. Convex’s consistent compounding of CRV has grown its influence, and boosted its rewards, to such an extent that other aggregators such as Yearn, Harvest, and Badger have deployed at least a portion of their TVL into Convex just to stay competitive. Here’s a snapshot of Convex’s popularity as a strategy among yield farming protocols:

→ Yearn currently has ~36% or $1.7b of protocol TVL deposited into Convex strategies. 90% of farmed CRV are swapped into the respective LP tokens and redeposited into the vault while the remaining 10% of CRV goes into Yearn’s Backscratcher yveCRV-DAO.

→ Badger currently has ~54% or $406m of protocol TVL deposited into Convex-based strategies. Badger’s strategies build on Convex’s flywheel, compounding 90% of farmed CRV and CVX in cvxCRV and CVX’s helper vaults.

→ Harvest currently has ~25% or $121.4m of protocol TVL deposited into Convex-based strategies. According to Harvest’s strategy documentation, Harvest’s doHarkWork() function sells 70% of vault proceeds go to compounding underlying assets, while the other 30% is used to market buy FARM.

This information should help demonstrate the power of Convex’s flywheel and the effect it has had on building a defensible moat for farming CRV. That being said, other aggregators like Yearn do have their own advantages. Namely, they have more flexibility in being able to shift funds between different protocols, not being entirely dependent solely on Curve. Currently, Convex does not have the same luxury and, based on their token design, incorporating other protocols beyond Curve seems unlikely or at the very least challenging. 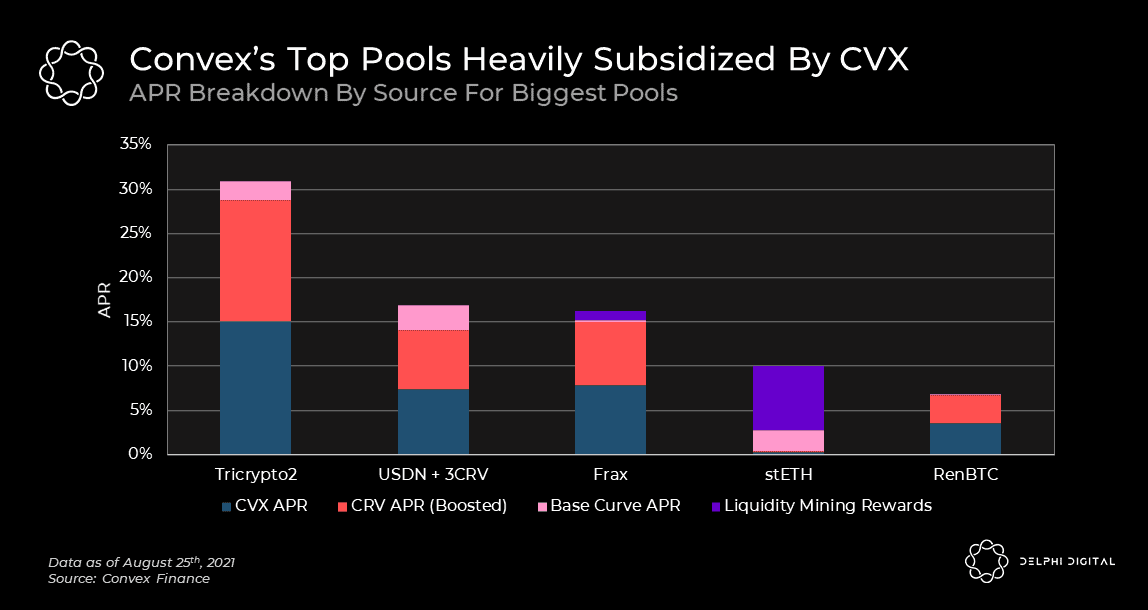 Clearly, attractive yields have been the driving force for increased traction but there are several different sources of it. Above, we’ve charted the yield breakdown for the top Convex pools by TVL to see which components are having the biggest impact. Up until now, we’ve spent a lot of time discussing the yield coming from Curve but, as you can see, CVX issuance has played a key role juicing overall returns, making up roughly half of it for most of the pools shown.

Importantly, while the yield from Curve may continue to grow over time, the yield from Convex may not, as CVX issuance tapers. So, what do these incentives look like long-term? In order to answer that question we must look at CVX’s emission schedule and value accrual. 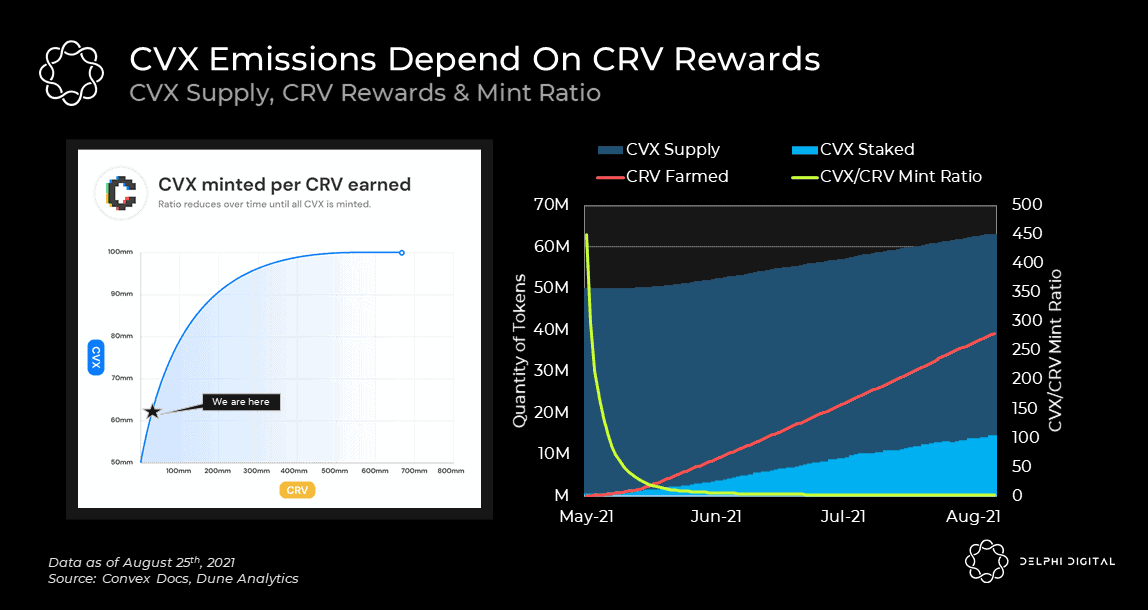 Interestingly, CVX emission is not a function of time but is rather determined by the amount of CRV rewards farmed by Convex. At launch the CVX/CRV mint ratio was ~450. This means that for every 1 CRV that was farmed, ~450 CVX was emitted. Fast forward 3 months, and the mint ratio is at 1.61 CVX for every 1 CRV farmed. Moving forward, this will continue to fall until the entire supply of 100m CVX is emitted. 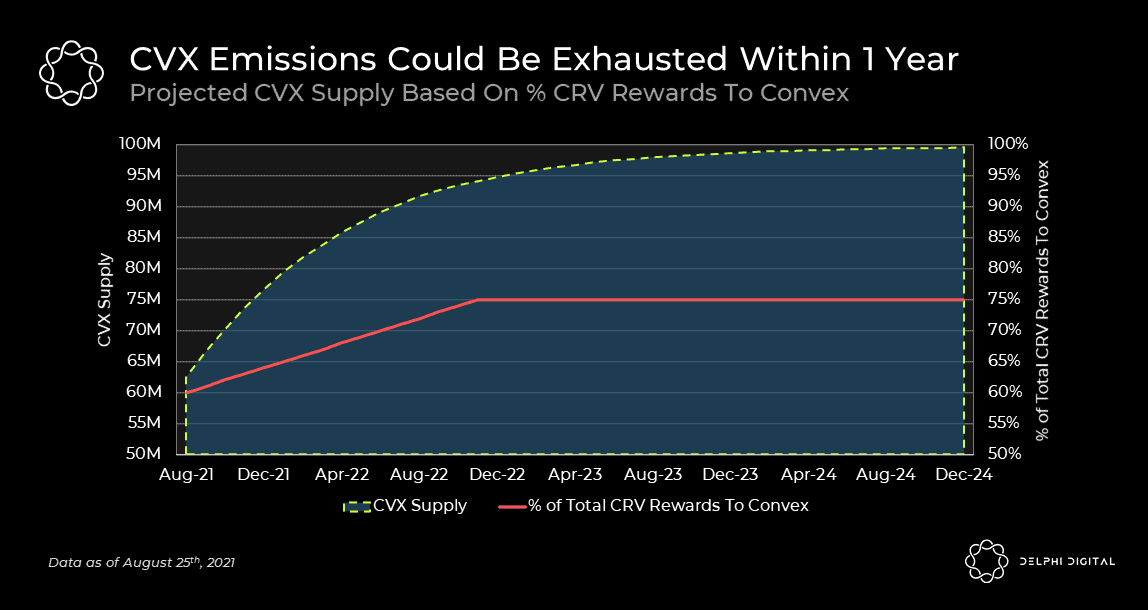 To understand how long this token distribution could take, we projected future CVX emissions assuming a 60-75% take rate on CRV rewards (its currently ~73%). As shown in the chart above, if this trend were to continue then the CVX supply would be nearly exhausted only 1 year from now. The breakdown of where these emissions go can be found here.

Assuming Convex is able to earn that much CRV over a prolonged stretch of time, it would end up having substantial control over Curve governance given the staked veCRV it would accrue. This will allow Convex to continue boosting the yield it is receiving from Curve, even as the incentives derived from its own token, CVX, diminish. Supply is only one piece of the equation, however. What does Convex’s value accrual look like? 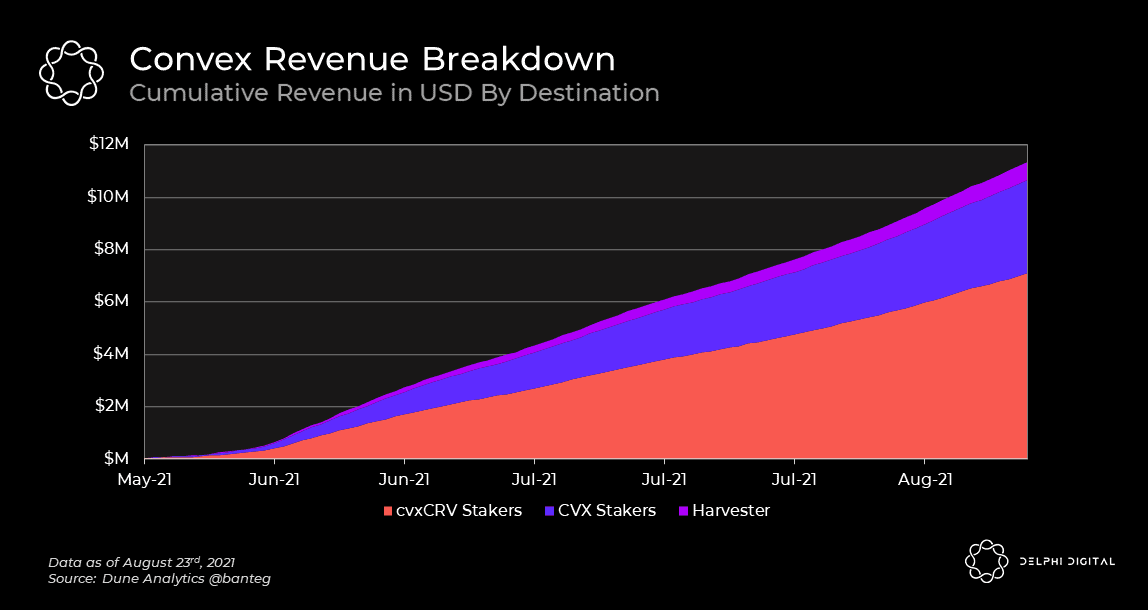 Currently, Convex distributes the yield it earns the following ways:

Convex has been able to capture meaningful value thus far, generating cumulative protocol revenue of over $11.3m in only 3 months. More pointedly, earnings to CVX stakers are currently $18.4m/year based on a 10-day average of revenue, equating to a fully diluted P/E of 38.5 (Note CRV emissions were cut on August 13th). In Convex’s current fee structure, the two main drivers of earnings to CVX stakers are CRV price and the % of CRV daily emissions it captures. 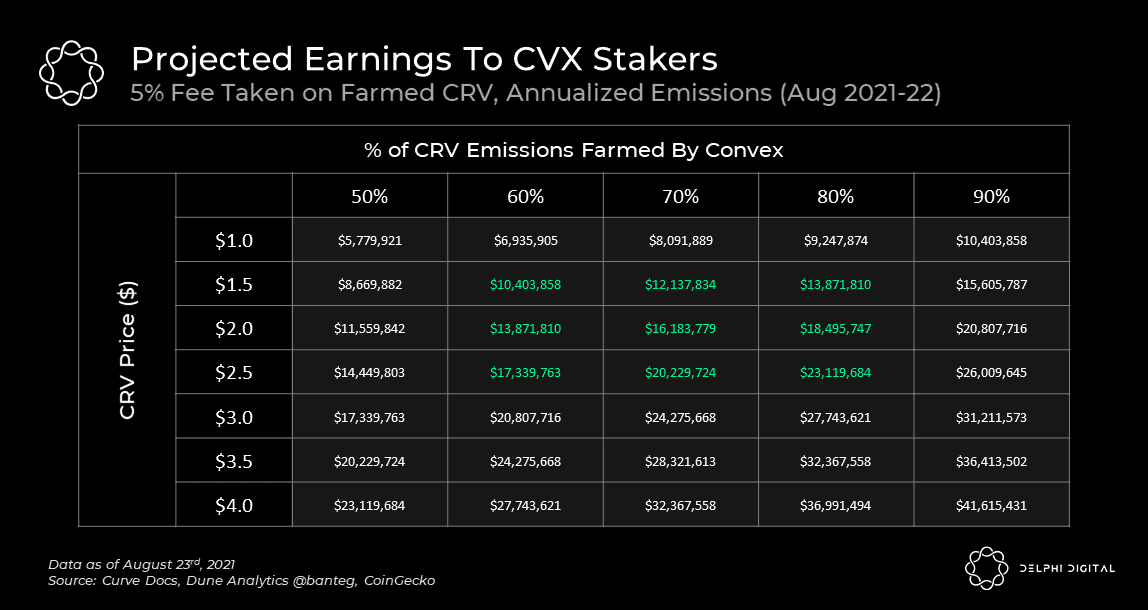 As mentioned previously, Convex is earning ~73% of CRV emissions. In the table above, we annotate the current range it’s been gyrating around in green.

There are other factors that affect CVX’s value beyond cash flow, such as its governance power within Curve. On this point, it’s worth repeating that Convex controls roughly 30% of all veCRV at the moment. With CVX governance coming soon, giving individual CVX stakers the ability to exercise veCRV voting rights on Curve, it’s possible that governance power could be further monetized with developments like bribe.crv.finance. Although it remains to be seen if something like this would be a healthy development for the Curve ecosystem and if Convex stakers would use such a product. Furthermore, we expect Convex will vote in CRV rewards when a cvxCRV/CRV curve pool is released, further strengthening cvxCRV’s peg and allowing the perpetuation of the flywheel even when CVX incentives end on the Sushiswap LP.

It is important to note that CVX’s earnings are tied to Curve emissions. The above table only accounts for Curve LP emissions from August 2021-2022. CRV LP emissions will continue to be cut overtime at ~15% per year (see emissions schedule here). In order for CVX to retain/grow its earnings, it must increase its market share of CRV farmed, or the CRV token price must increase enough to offset the decrease in emissions. This again shows how Convex’s destiny is heavily intertwined with the success of Curve and its ability to accrue value from trading fees. Perhaps in the end, it’s even possible that Convex could control Curve.

P/S: Shoutout to Gabriel from The Spartan Group for helping us with projecting Convex’s emissions! 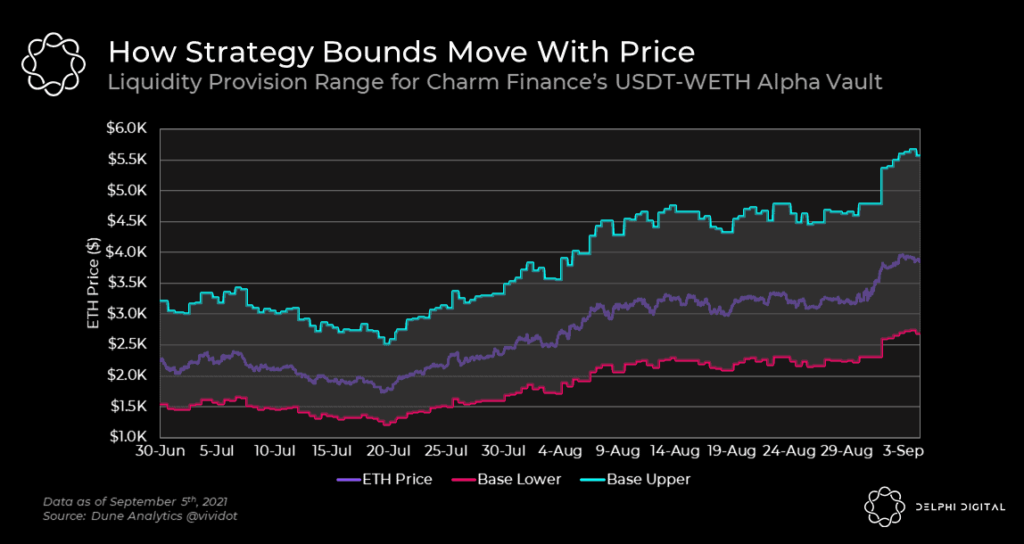 $AMPL – The Not So Stable Stablecoin